Included below are two analyses of Glasgow City’s road network. These analyses were carried out using various functions of the free version of sDNA software in QGIS. They consider pedestrian accessibility and cyclist flows around Glasgow. Findings highlight main corridors and pockets of accessibility for people who use active transportation.

The road network used in each analysis is considered to be a local bike/ped network from Open Street Map (OSM) road links. The bike-ped network includes all cycle paths and footpaths and excludes motorways and motorway links. The Glasgow road network data was extracted from OSM by mapzen.com.

The sDNA plugin toolset can generate a variety of metrics related to spatial network analyses. You can follow this link for a full list and description of the various metrics built into the sDNA software.

The network preparations used to generate the Glasgow bike/ped network follows the recommendations from the architects of the sDNA software. The analyses only considered the shape of the network, which excluded slope, for which sDNA+ is required. All link weights were set to 1 which assumes no preferential treatment of road link types. This study could be improved by weighting preferred links for active transportation (including cycle lanes).

Betweenness is a discrete link count of geodesic (shortest distance) paths that cross through each link. It assumes the network is populated with entities that go from everywhere to everywhere else, subject to a maximum trip distance parameter. The distances parameter was set to 4000m radii in this study which is the distance considered appropriate for an average cycle trip. An angular geodesic was chosen, which seeks the shortest path while minimising the number of turns between origin and destination. In short, the betweenness metric is a measure of the number of trips that pass through the link with a maximum length of the established radius while minimizing the number of turns.

A number of previous publications have found a strong association between Betweenness and vehicle flow. Therefore, this study can be considered a proxy for the vehicular flow of cyclists within Glasgow, Scotland. Two output images are included below. The first image is a city-wide view of the predicted cycle flows around Edinburgh, and the second image is the City Center. 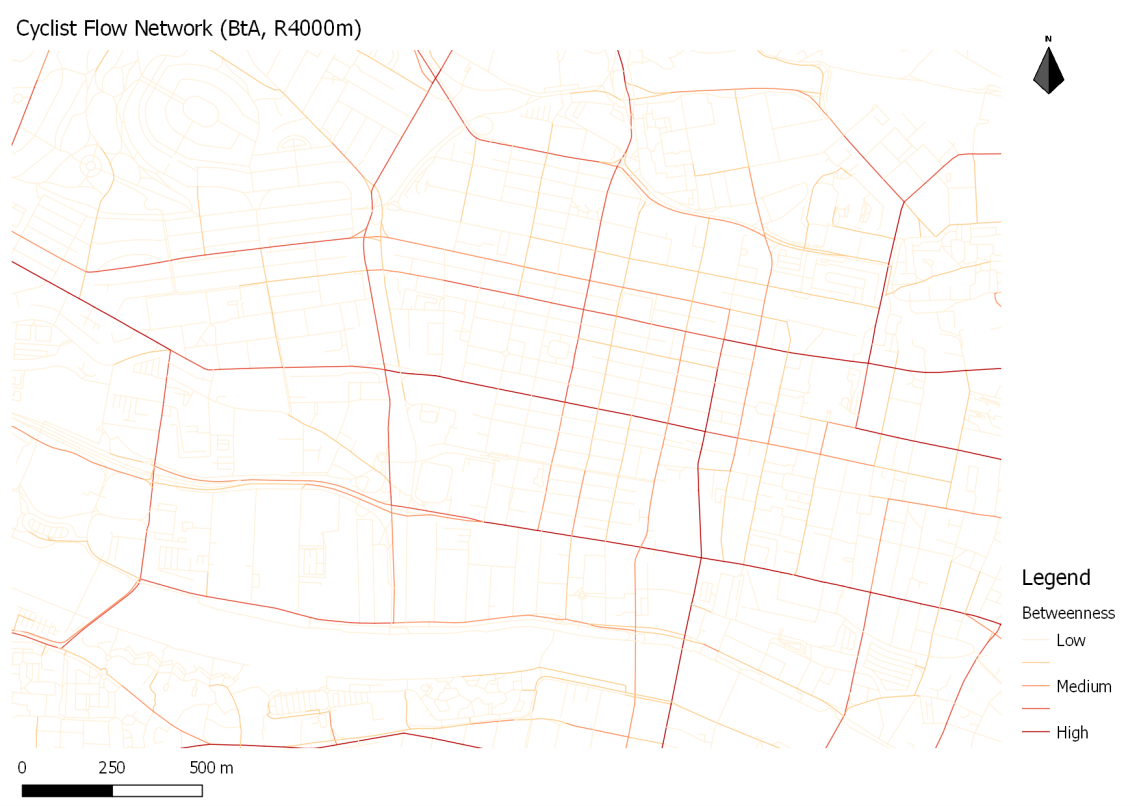 An evaluation of the images suggests there exists main arterial links would be roads of high use among cyclists travel average distances in Glasgow. This reflects previous work on the preferences of cyclists, which states that cyclists prefer direct routes between origin and destination. Future work may want to compare the betweenness values against crowdsourced activity data, such as Strava Metro data.

Another useful metric in dealing with active transportation is network quantity penalized by angular distance NQPAD or accessibility. This measure is known as a gravity model. It again assumes the network is populated with entities that go from everywhere to everywhere else, uses an angular geodesic with a max trip distance of 400 meters. This distance is considered an appropriate distance for an average pedestrian walk. This analysis highlights predicted areas that are easily available for pedestrian travel by foot.

The images below include a macro view of pedestrian accessibility. The second image is a close up of the city center. 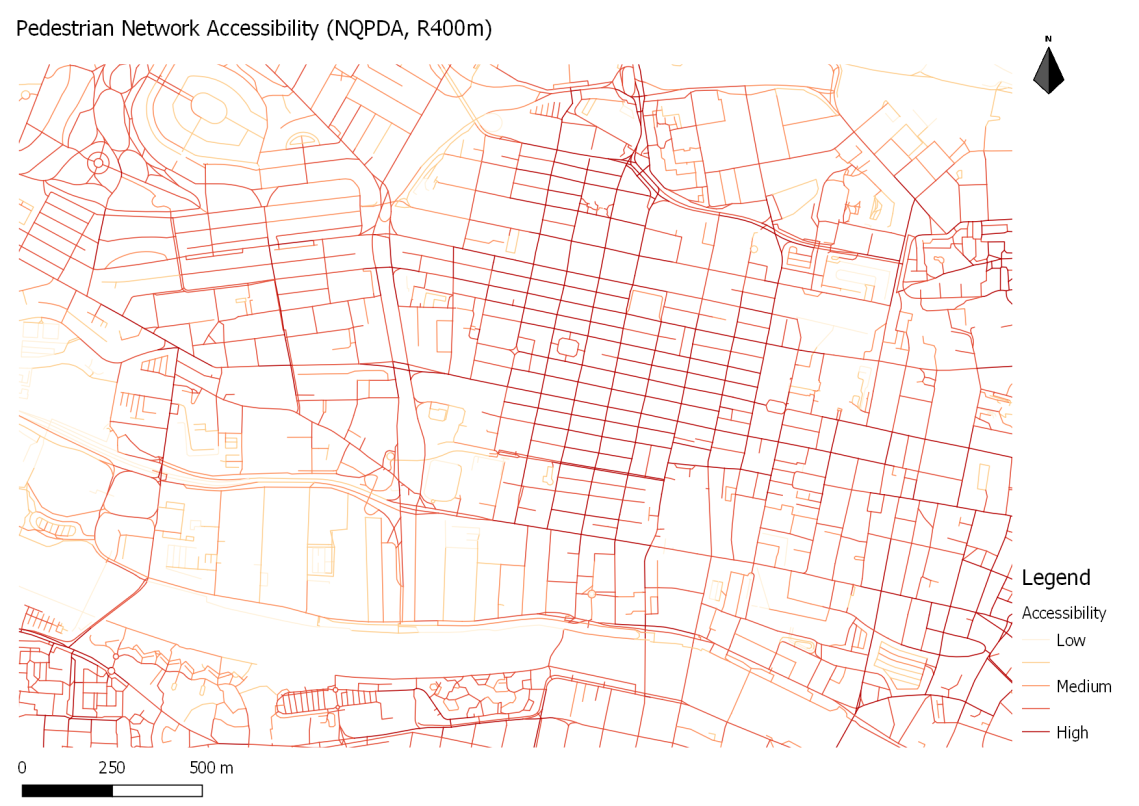 The models suggest areas of Glasgow are highlight accessible by pedestrians traveling by foot. However, they also suggest area areas are relatively less accessible. New development in these areas should consider improving accessibility for foot traffic if city planners and decision makers want to improve mode share of active transportation.

Published by Daniel I. Patterson