This blog post should really be called, How to Measure Centrality Among Bikeshare Trips Using pgRouting and What It Means. I decided against that because, well, the title is already long enough!

In this post, I explore the idea of using pgRouting as a platform to measure trip centrality. I will define centrality, and the steps I took to measure it in a group of bike-share trips that took place in Washington, DC in August of 2019.

Here are the general steps I took to explore this idea:

Lately, I’ve been exploring the routing platform, pgRouting. pgRouting is a great routing engine for tasks like calculating the shortest distance between points, mapping travelsheds, and solving the traveling salesman problem. The beauty of pgRouting is that it’s an extension to PostgreSQL + PostGIS and therefore allows the same kind of relational functionality that makes the SQL family so powerful when executing routing queries.

I’ve talked about how to route bike-share trips in other environments, including R using stplanr, but in this post, I discuss how I built a network and routed 1500 Capital Bikeshare trips from August 2019.

Centrality is an extension of graph theory that seeks to measure the importance of different parts of a network. In this case, centrality will be a measure of road segment popularity. We’ll measure this by the number of times a group of trips are passed through a specific segment using a routing algorithm. There are plenty of fancy ways to configure your routing algorithm, but in this case, I used Dijkstra’s short path on a prioritized network (which is a little fancy, I guess, right?).

If you’d like to read more about centrality, here are several papers:

If you’re not familiar with Open Street Map, I encourage you to read about it, the foundation, as well as the associated community. In short, it’s a map of the world created and maintained by volunteers. The world map is comprised of spatial vector data and organized by a key:tag system. All of the vector data is available under the Open Data Commons Open Database License.

There are several sources of OSM data, including:

I generally use openstreetmap.org to explore and locate tags, Turbo Overpass to download discrete data (like a specific trail), and GEOFABRIK to extract batch files.

For this application, I downloaded the district-of-columbia-latest.osm.bz file from GEOFABIRK without much exploration. osm2pgrouting can’t read compressed .bz files, but it can read decompressed .osm files, so I used this line of code after navigating to the correct subfolder to decompress .osm for the next step.

As for the raw bike-share data, I used the raw data from the Capital Bikeshare (CaBi) program. Since the raw trip data doesn’t include origin lat/longs, I also needed station location to join the trip origin. If you’re fancy, you could probably download the json file from online, but I decided to shoot over to the DC open data portal for the station point data. Quick and easy.

osm2pgrouting is a very useful tool for building a routable network from OSM data into a PostgreSQL database for pgRouting. osm2pgrouting was designed as another open-source platform to deal with the problems of building a routable network from OSM data using the pgRouting native function, pg_createTopology. The Wiki page for pgRouting says you should assume OSM data is poorly noded, and without osm2pgrouting, suggest you run some additional commands before executing your routing function. I’ve had success creating a half-decent routable OSM network using pgr_nodeNetwork on the street network that results from pg_createtolopogy and subsequently analyzing and cleaning the network. However, osm2pgrouting is so easy once you get the hang of it. One caveat is that osm2pgrouting can struggle with large datasets (such as the entire road network of California). There’s another platform that might be able to handle large datasets that isn’t open source called osm2po. If anyone has experience with this or another platform in handling large datasets, I’d be happy to discuss (OSRM anyone?).

Osm2pgrouing utilizes a configuration file to set network parameters, which is another way to say that you can define the extents and prioritizes your network. For example, you can build a network that omits motorways, which is what I did for this task. The source for osm2pgrouting offers several configurations files to start with on your routing journey.

After I had the decompressed osm file and my servers setup, I ran the following to create my ways and points tables.

Notice I established a prefix on the data to help me organize the information.

The outputs of this included,

This script searches for the nearest node within at least three legs to the station location using a cross-lateral join. The cross-lateral join is probably not the best way to handle this due to computation time, but since we’re dealing with such a small dataset, computational time not a problem.

I subsequently joined this station location information onto a new table of trips to house additional information. Notice here is where I define the trip count to route using the LIMIT clause. I could have handled this better, but what the heck, it’s simple right?

After this, I established a cost value on my road segments. This step is required for the routing algorithm to determine the amount of travel along a segment. In this application, I decided to use length as my cost parameter.

I wanted to test to see if my engine worked and trips were routable, so I wrote a script to infer the shortest path for each trip during the study period. I ended up with routes for each trip. You can see I’ve highlighted trip id 1600 to illustrate the data resulting structure.

Another possible way to think about these individual lines is an inferred route chosen by the user. I doubt these are very valid. There are a lot of ways we could measure this, such as comparing actual trip lengths/times to inferred trip lengths/times.

The second script that I executed aggregated the geometries by geom ID, rather than bike-share trip ID. In the end, I ended up with a data frame of road segments with a count of trips the routing algorithm sent through each segment. This is a basic way of defining the centrality, and in this case, the segments most often used by the bike-share users during our study period.

Here’re the script I used to generate measures of centrality.

Here are the results from the script above, color gradient over count:

Obviously, this doesn’t accurately reflect reality, but it shines a light on how we can start to think about our bike-share trip data in relation to our road network. Specifically, we can begin to think about how we can answer the difficult question of where do people ride bikes?

Down the line, if we can verify the routing algorithm, then we could start to point to areas on the network to prioritize investments. We can point to road segments where people ride bikes say, “perhaps we should spend money on this location to increase safety and network quality for bicyclists”. Perhaps the argument for building buffered bike lanes, fix potholes, and improving intersections will be easier with this inferred measure of use.

I also took a minute to measure centrality on user types. I measured centrality among members and casual users. The results are surprising. 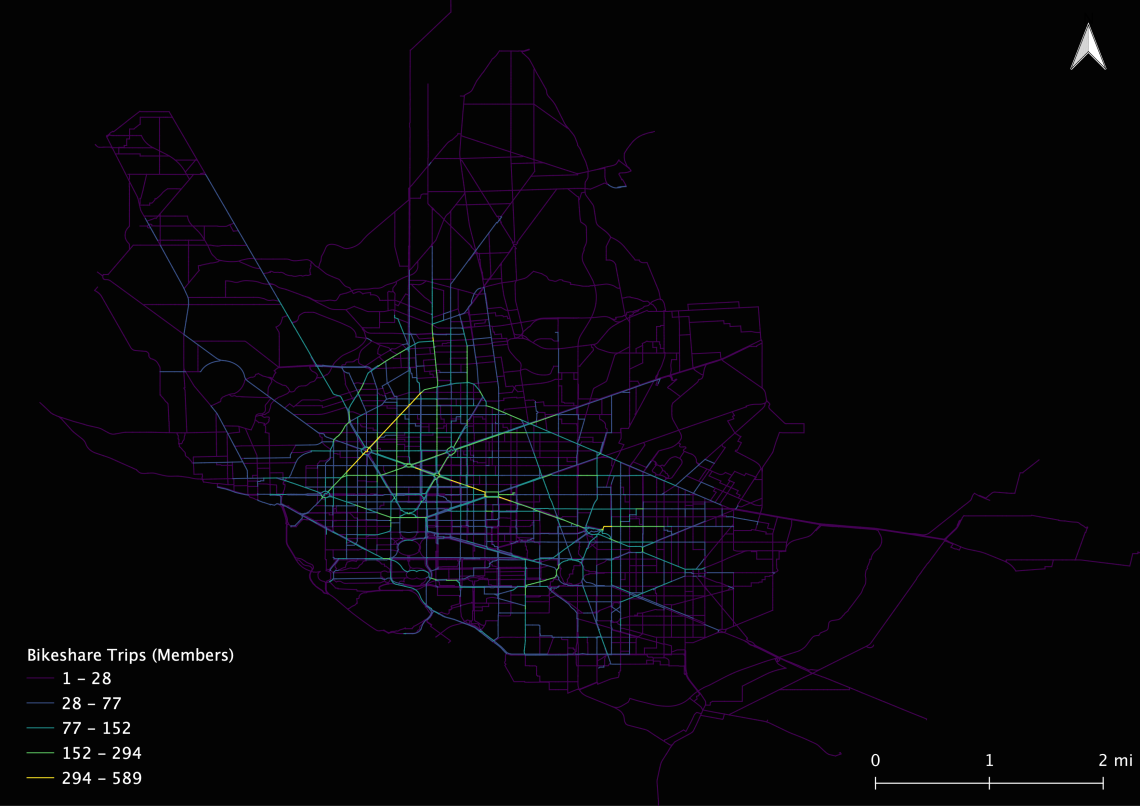 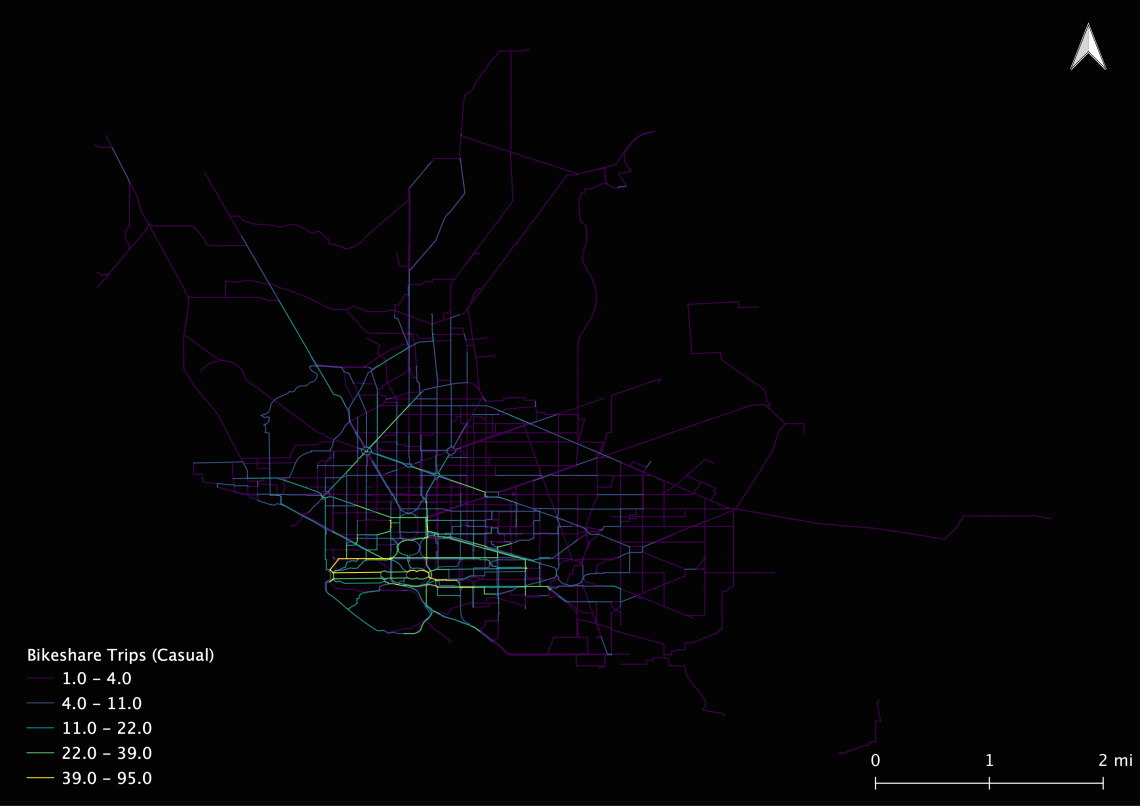 Together these images tell us two things:

I want to point out here that I only routed 1500 trips, which is especially problematic for reviewing these user type maps because I didn’t control for user type distribution. Again, this post is intended for us to explore the idea of centrality on bike-share trip data using pgRouting.

In sum, this would seem like a good starting point to apply this at scale. One problem that needs further discussion is computational time. This task took a while to finish, and would not be appropriate across a large number of trips. I’m currently exploring OSRM to apply the same workflow discussed hear across a large area, using many more trips.

For more information on pgRouting, the manual can be found here:

Published by Daniel I. Patterson

Transport Planner, Cyclist, Data Guy, MS Urban Transport from the University of Glasgow View all posts by Daniel I. Patterson